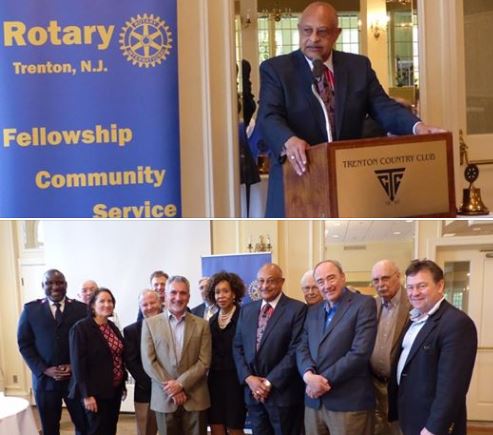 You could hear a pin drop. And why not, we were treated to a very insightful talk from Dr. George Pruitt, the Past President of Thomas Edison State University in Trenton. He is the among the longest-serving public university presidents in the nation and was identified as one of the country’s most effective college presidents in a study of presidential leadership.

An astute student of the history, he credits Thomas Jefferson as the Founder of Public Education in America. It was a novel concept not found anywhere else in the world. He believed that an educated citizenry was essential to maintain a strong Democratic form of government.

He pointed out that prior to the Declaration of Independent, governments were formed by Tyrants or Royalty…America is different. The people created the government to be responsible to it citizens, not the other way around.

Today’s vast Income inequality, is a symptom of education disparity more than economic. “It’s the school system…stupid” NJ spends more than any other state per person on education, yet ranks merely in the middle among states in academic results.

He also underscored that we ultimately get the society that we create. Thomas Jefferson encouraged active engagement. In fact, all the important initiatives to improve society have been advanced by CITIZENS not politicians. Examples include: Civil Rights, Women Voting Rights, Gay Rights, Disability Access, Employment Rights

With 50% of the Seniors in Trenton Central High unable to pass the minimum Math or English proficiency test, he offered concrete suggestions to ameliorate the horrible systemic problems, but the culture of dysfunctional management is 35 years entrenched.

On the positive, the current Mayor is doing his best…good luck.

Save the Date! Wed, 7/28/21 7pm-8pm (via Zoom)
Facebook Tutorial with Rotary Club of Robbinsville Hamilton🎵💻

Cindy Schwab Rosen from Robbinsville-Hamilton Club will share with us their best practices and tips for 2021. You can apply the same skills for your personal, business lives and have some fun, too!

If you would like to become a member or visit us a guest,
please email membership@trentonrotary.org🥰
#rotary #trenton #robbinsville #hamilton #newjersey #facebook #socialmedia #community #support #funevent RotaryDistrict7475 ... See MoreSee Less