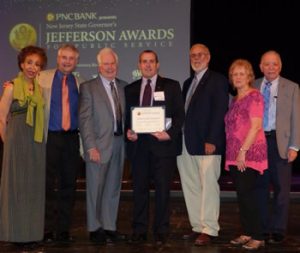 On June 2, 2018, the Trenton War Memorial was filled with love and goodwill. The Rotary Club of Trenton was an honoree for the Jefferson Award. “It is the oldest and most prestigious recognition program for volunteer/public service, and are the official recognition program of the United States Senate.

The New Jersey State Governor’s Jefferson Awards administer that recognition program for New Jersey and are also the official recognition of the Governor’s Council on Volunteerism. There were multiple winners in 22 separate categories among several hundred nominees.

Our category was “Service to Youth”. President Bill Cleave was the nominator and accepted the Award. The two Club Youth programs that were noteworthy include: First, we organized a “College Night” at Rider University with multiple speakers and educational sponsors. We informed hundreds of high school students how to navigate the application process and Financial Aid Programs. The entire Club contributed to its great success.

Secondly, the Trenton Club was instrumental in supporting the 39 athletes who ran for the benefit of the Boys & Girls Club of Trenton. Event organizers Bill Sheehy and RJ Lewis ran the Trenton Half Marathon (13.1 miles) along with Crystal Bacon. Four other members, Bill Cleave, Mike Tusay Jr., Nick Tusay and Yuriko Bullock ran the 5K (3.1 miles). In total, our Club, the Princeton Corridor Rotary Club, and the Board of the B&G Club fielded 11 teams that raised $160,875.

We established a Financial Literacy and Entrepreneurship Program. Rotary member, Dave Anderson, the CEO of the B&G Club will oversee the 5 year Educational Program beginning in September.

Rotary Club of Trenton, New Jersey is with Glenn Paul.

The Rotary Club of Trenton has an old adage: “The best programs come from the members.”

Long-standing member Glenn Paul had us riveted by his presentation on “Effective Communication”. We all know him as an articulate Princeton graduate who is never short on insightful observations. Although in retrospect his points appear as common sense, we oftentimes fail to incorporate them into our daily lives. I’m guilty.

He highlighted the dilemma of many young people today, who despite the proliferation of Social Media, suffer from loneliness. This is reflected in an alarming increase in suicidal rates.

Here are a few gems:
...Memorialize our life by printing a yearly Facebook Notebook. Your love ones will someday be thrilled to see who we were and what we thought many years from now.

...Don’t be afraid to say “I’m sorry” whenever you have offended someone. It’s a powerful way to build trust and goodwill.

...Never threaten anyone under any circumstance. It will invariably lead to resentment or retribution.

...Give a warm hand to everyone you encounter, regardless of any perceived impressions or status.

...Heap appreciation on any positive action or comments directed at you.

...Be passionate about what is important to you. He used the comparison between owners of a Tesla vs. a Ford. Owners LOVE for their Tesla has driven its stock price.

...Give “Bad News” in person, but “Good News” in writing! Usually we do it the other way around. We frequently deliver bad news via an email, letter or phone message.
That’s cowardly. More noteworthy, if you really want to say something praiseworthy, put it in writing.

Following the meeting, I was going to tell him how much We all enjoyed his talk. But, instead I hope this post does it justice. Great job, my friend! ... See MoreSee Less