RESEARCHED BY KEN TILLMAN AND UPDATED IN JULY, 2002

Since its beginning in 1969, the student exchange between the Rotary Clubs of Trenton, N.J. and Omiya, Japan has been an important international program for both clubs. It has provided an outstanding opportunity for increasing understanding between our two countries as well as giving students a rare opportunity to be immersed in the culture of the exchange country. Students live in the homes of Rotarians while on exchange and participate in family activities. The friendships that have developed over the years provide ample evidence of the value and importance of this exchange program which is so highly respected by Rotarians in both countries. It is probably not surprising that this experience has led to a change in career goals for some students and for every student it has given a much broader global view which has, in turn, impacted on their lives in many ways.

The idea for this program began in 1967 when Mr. Ito, a representative of the Fuji Corporation, “made up” at the Trenton Rotary Club. It was on this occasion that he met a Trenton Rotarian, Mr. Tadafumi (Tad) Mikkuriya. Tad had joined the Trenton Rotary Club on March 19, 1959. He was a structural engineer who had graduated from the University of Pennsylvania and then founded a company called Tada Engineering in

Trenton. Tad was born in Saga, Japan and developed a friendship with Mr. Ito as a result of his “making up” at Trenton Rotary.

On September 18, 1968, Tad visited the Omiya Rotary club and gave a request to the club members to form a sister-club relationship with the Trenton Rotary Club. (Records do not indicate if he made the trip to Omiya for this purpose, or if, as is more likely, he arranged to visit the Omiya Rotary Club while on a business or family trip to Japan.) One month later, in October of 1968, Mr. Arai from the Omiya club visited Trenton and discussed with Trenton Rotary members the possibility of a sister-club and/or student exchange program. He must have received a positive response since he returned to Japan and presented the same idea to the Omiya Rotarians October 17, 1968. The matter was referred to a committee and just a few weeks later on November 6, 1968, the committee made the decision to enter into a relationship with Trenton Rotary.

Records don’t indicate whether the sister-club concept was dropped or if the student exchange was considered to be the initial part of a more far reaching sister-club concept. After this point all records speak of the student exchange program and do not mention the sister-club program. Because of his vigorous efforts to institute the exchange program, his extensive support during the formative years of the exchange, and his ability to bridge the communication gap between the two clubs, Tad Miuriya is referred to as “The Father of the Exchange” in Omiya.

Trenton Rotarians were also carrying on discussions about instituting the exchange program at this time. In May, another Trenton Rotarian, Bob Schierck, visited the Omiya Rotary Club. At the Omiya club meeting on May 21, 1969, Bob was formally introduced and then led a discussion about the student exchange. No doubt he shared proposals from the Trenton Rotary club and there must have been a good deal of give and take as procedures for the exchange were agreed upon. It was decided that the sending club would pay travel expenses and the host club would pay living expenses. The program has followed this principle from 1969 until the present. 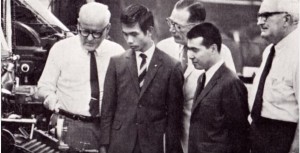 The Japanese Rotarians did not waste any time. In fact, on June 4, 1969 the exchange program was announced at their meeting and Rotarians were asked to get English speaking applicants for the exchange. Two weeks later on June 18, 1969 they selected two young men to come to Trenton as the first exchange participants. One student was in his second year of Medical School and the other one was in his second year of Electrical Engineering School.

The number of students who have participated each year has varied from one to six. Ages have also ranged considerably but most have been between the ages of 16 and 22. Trenton Rotarians are pleased about this program since it is not a Rotary International program, but a program designed specifically for the families of Trenton and Omiya Rotarians. In the beginning, Students went for three or four weeks during the summer months, recently the stay has been reduced to 2 weeks.

Both clubs provide for all expenses, except for personal purchases, while students are being hosted. Students stay with several families and are treated to a variety of experiences in addition to the best experience of all, which is participating in typical family activities. Japanese students return after experiencing New York City, Philadelphia, Washington D.C. and the shore in addition to many local activities. Our students typically get to visit Tokyo, ride the bullet train, visit temples, and participate in traditional ceremonies and rituals. It is a life influencing experience.

John Theoharis and Ernie Rydell visited the Omiya Rotary Club in May of 1978 while attending the Rotary International Convention in Tokyo. In the summer of 2000, two Rotarians from the Omiya Rotary Club, Akira Iwasaki and Tomikazu Nagamine, accompanied their students to Trenton for a week. We were also privileged to have Ryoko Nagamine, wife of Tomikazu, with us during this time. From Trenton Mike Tusay has visited Omiya.  Karla Pollack, Ken & Dee Tillman, and Bill & Maryann Beitel attended a Rotary reception in Omiya after attending the 2004 RI Convention in Osaka.  It is visits such as these and the work of many Rotarians from both clubs in planning the program, hosting students, and arranging for meaningful activities that has kept this program being such a special international activity for our club and for the Omiya club.

The exchange progressed on an alternate year basis from its beginning in 1969 until 1976-77 and 1978-79 when the Trenton Rotary Club did not send students even though the Omiya Rotary Club sent students in 1977-78. In 1979-80 Trenton again resumed sending students and the exchange has continued every year since.

PARTICIPANTS IN THE EXCHANGE WITH OMIYA: 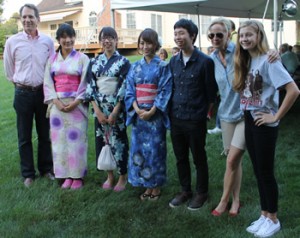